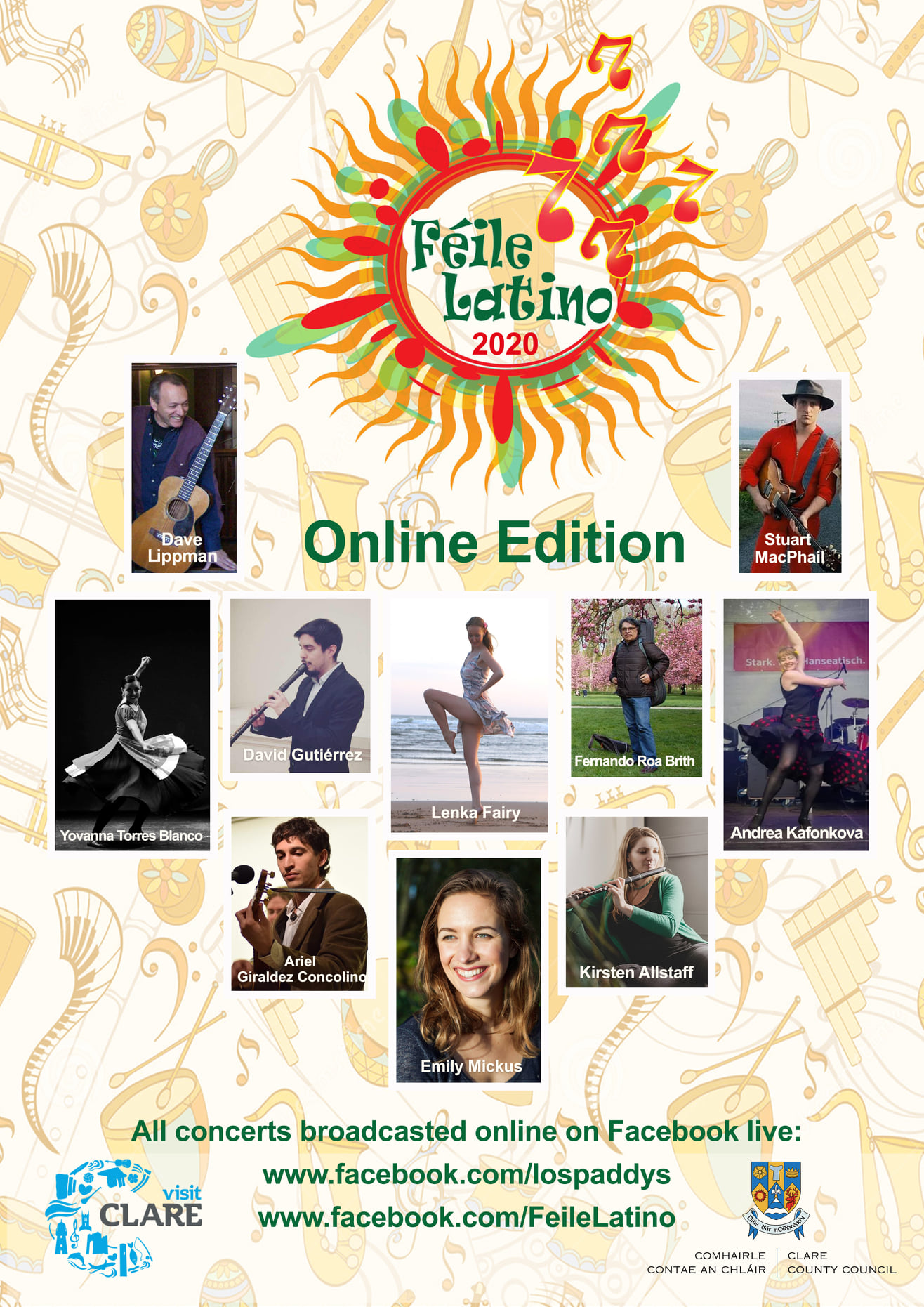 Emily Mickus has been keeping a busy schedule, completing a Masters with Irish World Academy in Limerick and touring the world from Taiwan to Germany with the “Dance Masters” Irish dancing show. In recent times she has been doing her hit Podcast “Every Body’s Story” which covers mental health, Irish dance,self-worth, fitness and many more important topics.
Emily has been a Zumba teacher online and publicly in both Ireland and the USA. For Féile Latino we will be sharing out the Zoom invitation code for free on the Féile Latino Facebook page so people can participate in fun and healthy Latin Exercise!

David Gutiérrez Villagómez is a master flute player and professor of music at “Universidad Academia de Humanismo Cristano”, in Santiago Chile. In recent years David did Masters in Music Performance at the “Irish World Academy of Traditional Music and Dance” and became a fixture of the traditional music scene in Clare and Limerick playing both concerts and sessions. David joined Irish band “Los Paddys” in their St. Patrick’s Tour of South America in early 2020.
David will be broadcasting a concert directly from Santiago in Chile to be enjoyed by both his friends in Co. Clare and around the world!

Before the pandemic hit, Los Paddys planned a tour to California and Mexico in late 2020 for a tour fusing Mexican and Irish music and dance folklore.
The 3 dancers from this show, Lenka Fairy, Yovanna Torrés Blanco and Andrea Kafonkova have still been collaborating and coming up with new steps and ideas, some of which they will show off during a Facebook live performance at the beautiful Courthouse Gallery in Ennistymon, the usual home of Feile Latino.

Dave Lippman is a musician and comedy commentator based in New York City who describes himself as “a musician at All Good People Against All Bad Things”. Dave’s witty videos about both Irish and American history are played widely on social media while he himself keeps playing music and being politically active on the streets of New York and its clubs and theatres.
Dave will be playing live from New York on Election result weekend which should make for a spirited performance for both Irish and American viewers to enjoy.

Fernando Roa Brith is a multi-instrumentalist originally from Chile, now based in Paris, France. Fernando has a history of performing at Féile Latino festivals in previous years with his band French Rumba. Most recently Fernando toured South America in early 2020 with Los Paddys, for their “Homecoming Tour”.
For Féile Latino 2020 the viewers can look forward to hearing some lovely South American songs and tunes performed by Fernando himself.

Kirsten Allstaff is a master flute player and Director of the O.A.I.M. Online Academy of Irish Music.
Stuart McPhail is a skilled guitar player and beautiful singer who has in recent years become a mainstay of the North West Clare music scene, playing regularly with his band “Starla”.
Kirsten and Stuart have been jamming a special Latin set which will be debuting at Féile Latino 2020.

Ariel Giraldez Concolino is a singer and multi-instrumentalist originally from Argentina. In recent years, Ariel performed many concerts with Los Paddys both in Ireland and abroad, most recently in Chile during the St. Patrick’s Tour in early 2020. Now based in Galicia in Spain,
Ariel will play some lovely South American songs and tunes for Féile Latino 2020.

We use cookies to ensure that we give you the best experience on our website. If you continue to use this site we will assume that you are happy with it.Ok